When my daughter, Emily, and I started writing this blog in the spring of 2020, we did not anticipate that almost three years later, there would still be no end in sight for this pandemic. As we begin a new year, we wish we had better news, but the data continues to tell a grim story, and, as our long-time readers know, we always ground our outlook in the numbers. 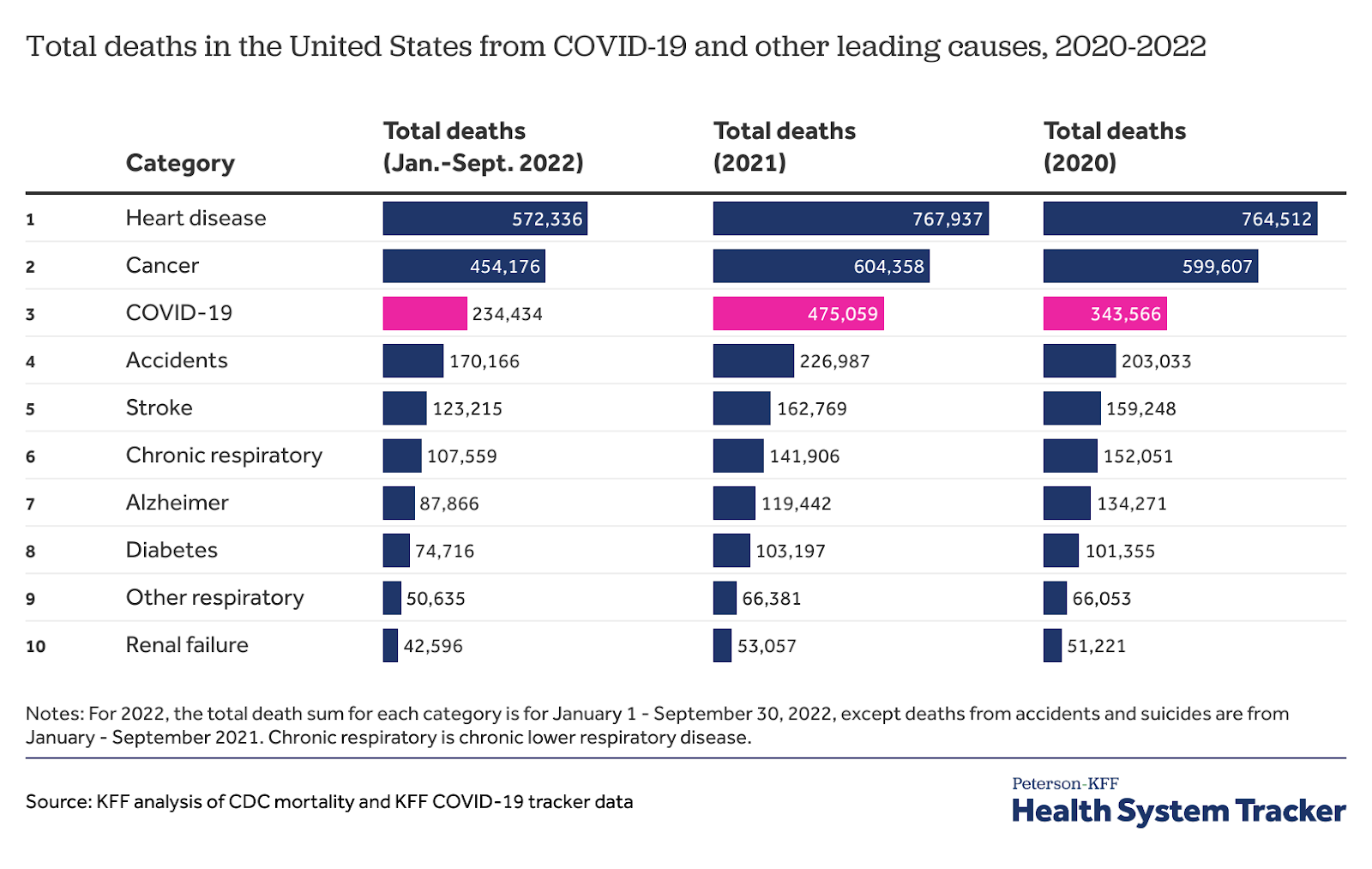 In late December 2021 the FDA approved both oral Paxlovid and oral Molnupiravir for outpatient treatment of SARS-CoV-2 with distribution beginning in January 2022. Unfortunately, all of the mask mandates were removed by individual states in 2022, and despite President Biden’s vow to institute a federal mask mandate during his 2020 campaign, the President and his administration adopted a decidedly anti-mask policy this year. CDC Director Rochelle Walensky even went so far as to describe masks as “the scarlet letter of this pandemic.” This irresponsible public health messaging has led to thousands of infections and deaths that could have been otherwise prevented by responsible mask wearing. We continue to urge our patients to protect themselves and others by wearing an N95 (or better) mask in public.

This year, multiple new Omicron variants BA.1, BA.2, BA.4, and BA.5 assaulted the world’s population of humans and other animals. By the time multiple companies made and tested Omicron BA.1 vaccines, BA.1 was no longer the dominant variant; in fact, it was no longer present. On August 31, 2022, the FDA allowed rapid introduction of an Omicron BA.5 bivalent vaccine. However, this has had no effect on new immune evading BQ variants. In December the first highly infectious recombinant variant, XBB, began spreading around the world. An additional variant, XBB.1.5, is now rapidly spreading across the country and the world causing increased numbers of hospitalizations and critically ill patients in the USA.

At the same time, we have had outbreaks and deaths from Influenza A H3N2 and RSV. Travel and lack of masking and social distancing have exacerbated the spread of these viruses. In addition, Mpox virus outbreaks occurred nationwide, a measles outbreak began in Ohio in unvaccinated children, and several cases of polio in New York were reported.

Part of why the United States’ vaccine-only approach to COVID-19 is so dangerous is that SARS-CoV-2 mutates, evading immune protection, and spreads more quickly than anyone can make, get approved, and distribute new vaccines. The Omicron BQ.1.1 variant is now being rapidly replaced by XBB.1.5.  As an example, at D4 Labs, we designed, manufactured and packaged a new vaccine for Omicron BQ.1.1 in 6 weeks. Minimal animal testing, IRB approval, human testing, and expedited FDA approval under an EUA would probably require at least another 6 months. Even if we skipped or delayed animal testing, obtained IRB approval, and internally did a standard two-dose immunogenicity study in 20 humans using IgG antibody to the RBD of SARS-CoV-2 as the surrogate marker for protection, it would still take three months in our in-house human testing and assay facility to complete the study. This approach would probably not be acceptable to the FDA for even EUA approval but might be attempted in individual states. The timely production and distribution of any new vaccine against any new SARS-CoV-2 mutant will be difficult to accomplish by any company using the current regulatory framework for approval of vaccines in the United States. Using XBB.1.5 as an example, it is responsible for over 40% of the infections in the United States in the last 28 days. Vaccines would have to be designed, manufactured, and distributed in less than four weeks to stop an outbreak of a virulent, highly-infectious respiratory pathogen. Considerable thought needs to be entertained on how to accomplish this task rapidly.

Sadly, we do not see things improving in 2023 for respiratory virus control in the United States unless people wear high quality masks (N95 or better) and practice social distancing again. Continued infection and death increases are expected in the next eight weeks with 113 million people expected to travel during the holiday season, schools reopening on January 2, and people returning to work in poorly ventilated spaces.

Here are our 14-day moving average determinations for SARS-CoV-2 for the United States. We use the WORLDOMETERS aggregators data set to make any projections since it includes data from the Department of Veterans Affairs, the U.S. Military, federal prisons and the Navajo Nation.

BQ.1.1 has five spike mutations that are different from BA.5. Four of these mutations allow escape from immunity from monoclonal antibodies, any prior infection (including Omicron BA.5), or any vaccine to include the bivalent Omicron BA.5 vaccine. Infections are still occurring in our clinic in patients that received the Omicron BA.5 bivalent vaccine. The XBB recombinant isolate XBB.1.5  has rapidly become the dominant infection in the USA. It took 28 days to become the cause of 40% of infections in the USA and it now causes over 70% of infections in Regions 1 and 2.

XBB.1.5 Proportion of Sequenced Isolates in the USA

Don’t want to miss an update?

Get the latest COVID updates from Dr. Wright delivered to your inbox as soon as they’re published!