The Omicron variant of SARS-CoV-2, the virus that causes COVID-19, was first identified in South Africa and was classified as a Variant of Concern by both WHO and CDC in November 2021. The first Omicron case to be sequenced in the US was identified in California on December 1 and the first reported death due to Omicron in the US was on December 20 in Texas. According to GISAID, in the last 30 days, the United States only sequenced about 2.56% of COVID cases (compare this to 9.8% in the UK, 6% in Australia, 18% in Denmark, and 17% in Israel), which would explain why we’re late to the game in addressing Omicron.

In under three weeks, Omicron has become the dominant variant in the US.

In the US, Omicron went from making up 12.6% of new COVID cases two weeks ago (week ending 12/11/32) to making up 73% of cases last week (reported 12/18/21). That’s an increase of more than 400% in one week. By comparison, the Delta doubled about once a week, going from around 3% of cases in mid-June to 41% of cases by early July and 62% of cases by mid-July. Omicron became the dominant variant in the US in less than half the amount of time that Delta did.

In Los Angeles County, new COVID infections per day (8,000+) are now over triple what they were a week ago.

In December, Monterey County has seen a spike in cases for all age groups, but especially for children 12-17.

Statewide, this past weekend, California averaged 2,456 more new cases per day than the previous weekend. 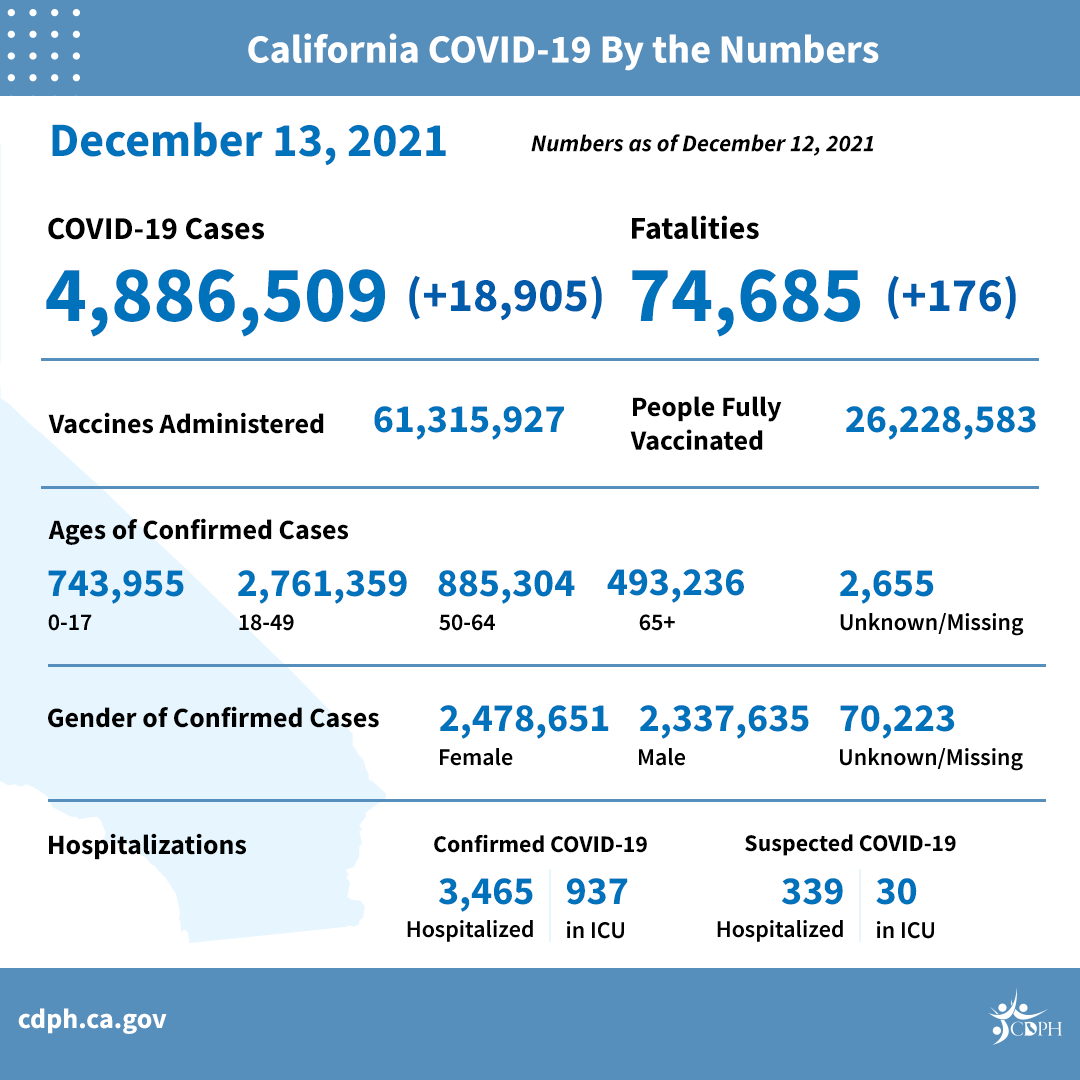 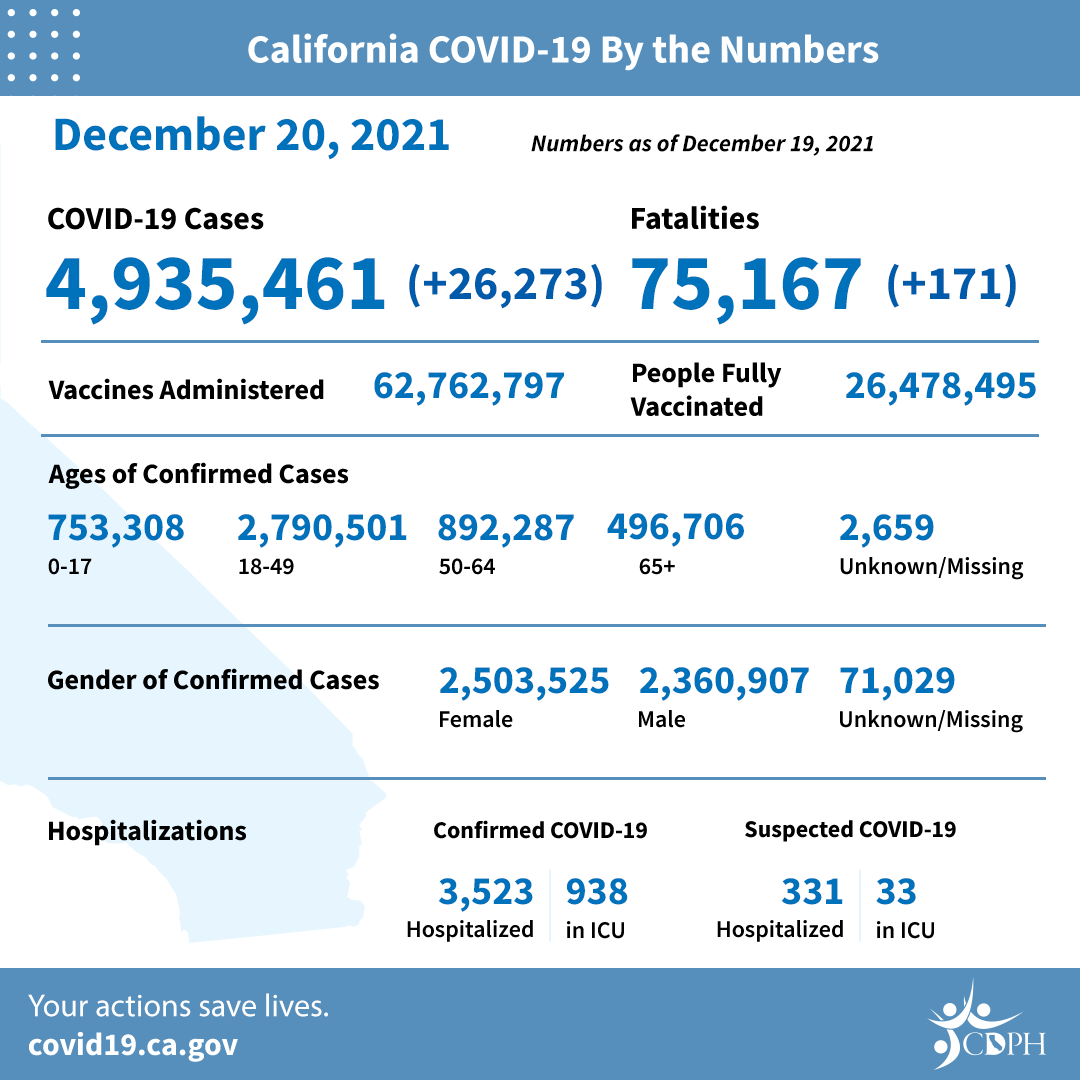 In the United States, as of 12/23/21, cases, deaths, and hospitalizations are trending upward.

Nearly everyone (vaccinated or not, previously infected or not) who is exposed to Omicron is likely to become infected; vaccines will still prevent many infections, hospitalizations, and deaths, just not as many as with previous variants.

A study in South Africa found that during the current Omicron wave, two doses of the Pfizer vaccine provided “70% protection against severe complications of COVID-19 requiring hospitalisation, and 33% protection against COVID-19 infection.”  In addition, researchers at Imperial College London estimate that the reinfection risk for Omicron is 5.4 times higher than for Delta, meaning that folks with previous COVID infections are likely to have limited protection.

Monoclonal antibody treatment (MAB) has saved the lives of many patients infected with other variants; it appears to be less effective against Omicron.

Two preprints, one published by German researchers on December 7, and another, a collaboration between American, Italian, Swiss, and Australian researchers, published on December 14, both suggest that due to Omicron’s 37 mutations in the Spike protein, 15 of which are in the receptor binding domain (RBD), it is able to evade our currently-available monoclonal antibody drugs. As William Haseltine explains in his write-up of the December 14 preprint: “Of the eight approved or authorized antibodies, all but sotrovimab completely or almost completely lost their neutralizing activity against the Omicron pseudovirus,” and “sotrovimab…retained neutralizing activity, but at a significant reduction.”

Omicron spreads more easily in households than Delta does, making it more likely that people will infect their loved ones this winter.

Data collected in UK households suggests that the secondary attack rate (chance that an index case in a household will infect someone else) for Omicron is 21.6%, compared to 10.8% for Delta.

Children may be at higher risk of contracting Omicron and being hospitalized, compared to previous variants.

A South African study found that “Despite very low absolute incidence, preliminary data suggests that children have a 20% higher risk of hospital admission in Omicron-led fourth wave in South Africa, relative to the D614G-led first wave.” And in England, hospital admissions for children over the last week are at an all-time high of 396.

This morning, the Washington Post reported that pediatric hospitals around the country are filling up; over the past three days, approximately 800 children per day were admitted for COVID infections.

Even mild infections can have severe consequences, like Long COVID and MIS-C. Those infected with Omicron who develop mild infections may still face long-term health complications due to Long COVID and/or MIS-C, and many of these patients in the US will go without proper diagnosis and treatment. Ed Yong has documented for The Atlantic how even health care workers have been dismissed and denied treatment for Long COVID. And yes, children also get Long COVID.

Now that you know more about Omicron, what should you do?

It’s time for our next 14-day moving average determinations and projections for infections and deaths from SARS-CoV-2 for the United States and my thoughts on vaccines and mutant viruses. We use the Worldometer aggregators data set to make our projections of future total infections and deaths since it includes data from the Department of Veterans Affairs, the U.S. Military, federal prisons and the Navajo Nation.

In the United States, SARS-CoV-2 deaths have increased for the first time since the last 14-day period. There were 701 more deaths per day than in the last 14-day period. In the last 14 days, the number of infections has increased by 62,024 infections per day.  This increase in infections over the last two-week period is due to two major holidays. On 1/15/21, 248,080 new infections occurred in the United States. There were also 3,805 deaths. Over 130,000 people are hospitalized in the USA and 28,937 serious or critically ill patients are in our hospitals as of 1/15/21.

A new mutant SARS-CoV-2 virus (lineage B.1.1.7), first seen in the UK in September, has now been found in multiple other countries. In California, two patients in LA county and three patients in San Diego county are infected with this new mutant. Two patients in Colorado and one in Florida have also been identified as of 12/31/20. As of 1/15/21, this new mutant has been found in nine other states (New York, Georgia, Texas, Connecticut, Pennsylvania, Ohio, Utah, Maryland, and Wisconsin. This isolate (let’s call it Lineage B.1.1.7 or SARS-CoV-2 UK) is more infectious than other previously circulating B2 lineage isolates (probably 30 to 40% increased infectivity). There are two deletions and six other mutations in its spike protein. One mutation involves a change of one amino acid, an asparagine at position 501 in the receptor binding motif with a tyrosine. This enhances binding (affinity) to the ACE-2 receptor and may alone be responsible for the increased infectivity of this isolate. Due to air and other travel this isolate should become the dominant isolate worldwide.

In a research letter pending publication in Clinical Infectious Diseases, a group of NHS doctors describe the case of a patient who was first infected with SARS-CoV-2 in April and became reinfected in December. After the patient’s second infection, Whole Genome Sequencing (WGS) was performed on samples from both instances of infection, and it was determined that the first infection in April was with a B.2 lineage variant and the second infection was with the new B.1.1.7 variant. While the patient, “a 78 year old man with a history of Type 2 Diabetes Mellitus, diabetic nephropathy on haemodialysis, chronic obstructive pulmonary disease (COPD), mixed central and obstructive sleep apnoea, ischaemic heart disease, with no history of immunosuppression” had only had a mild illness (fever being the only symptom) during the first infection, during the second infection, he had much more severe symptoms, including shortness of breath and hypoxia, which led to emergency intubation. He developed “Severe Covid-19 pneumonia complicated by mycocardial infarction with resulting trifascicular block and Atrio-Ventricular (AV) dissociation and pulmonary oedema.” (To read the full research letter, visit https://academic.oup.com/cid/advance-article/doi/10.1093/cid/ciab014/6076528 and click PDF.)

The patient described in this research letter was not protected by a natural infection with a B2 lineage SARS-CoV-2 isolate in April 2020 from having a potentially lethal second infection with a B.1.1.7 lineage variant in December 2020, suggesting that folks who have had a past SARS-CoV-2 infection should not expect to have any immunity to new variants such as B.1.1.7. All of the currently available vaccines were developed with spike protein from B2 lineages, so it remains to be seen whether these vaccines will protect against B.1.1.7 infections or the additional isolates discussed below.

A second mutation in the loop sequence has been identified in the South African, Brazilian, and Japanese isolates this week. This mutation will also enhance binding to the ACE-2 receptor and may interfere with binding of monoclonal antibodies to the SARS-CoV-2 receptor binding motif. If this rate of mutations and deletions continues in the spike protein, especially in the receptor binding domain and motif, in my opinion, then vaccine reformulation will be required in 2021.

We have a new President-elect and Vice President-elect, now confirmed by the electoral college and approved in the House and Senate on 1/06/21 despite a riot and invasion of the Capital by President Trump’s supporters. The President-elect has made the pandemic a first priority after Inauguration on January 20, 2021. Testing, wearing masks, social distancing and washing our hands frequently should no longer be political issues. These are non-pharmaceutical interventions used by most successful countries and some states to protect their citizens and their economies. New Zealand, Taiwan, and Australia are three countries that have done this successfully.  In the United States, Maine, Vermont, and Hawaii are doing a better job handling the pandemic than many of our states. The pandemic problem is overwhelming our health care delivery system in many states. Unless things change before Inauguration Day on January 20, 2020 (5 days away) we could, by our predictions, have an additional 1,221,405 SARS-CoV-2 infections and another 15,815 deaths. Our infections per day and deaths per day will continue to increase for at least another 8 to 12 weeks.

The Pfizer and Moderna RNA vaccines are both now approved in the USA. To vaccinate 80% of our population with two doses of vaccine, we will need over 500 million doses of vaccine. Unless we start vaccine shipments to clinics and physicians’ offices, not just hospitals and pharmacies, I doubt most people will be able to receive any vaccine until April 2021.

All current vaccines are based on the Chinese spike protein sequence from December 2019. Mutated isolates, as discussed above, may overtake our ability to produce vaccines and vaccinate the populace. Like Influenza vaccines, we may have to reformulate vaccines based on active, worldwide surveillance every 8 to 12 months. We need to perform more virus isolations and perform more DNA sequencing of viruses in each country, state, populous city, and county if we are to rapidly identify new mutations. I’m not sure we have the facilities, the equipment, and the trained staff needed to perform this work. I feel we are not prepared (or preparing) to do this and will suffer the consequences if we continue down our current path. “Magical thinking” will not solve these problems, just laborious work by many people. Are we all up to the tasks at hand?