Dr. Wright discussed the following articles with the members of the Borrelia (Tick-borne Relapsing Fever and Lyme disease) patient support group in their November meeting:

1. Autoimmunoreactive IgGs from patients with postural orthostatic tachycardia syndrome. (link to abstract)
Cardiologists at the Mayo Clinic in the Department of Internal Medicine looked at people with postural orthostatic tachycardia syndrome (POTS) to see whether they had autoimmune antibodies. The study revealed 40 unique proteins, many of which are associated with cardiac problems. The study concluded that patients with POTS do have autoantibodies, and these autoantibodies cross-react with cardiac proteins, possibly causing changes in cardiac function.

Dr. Wright commented that many patients with tick-borne illnesses have postural tachycardia, so in the case of damage to the cardiac muscle, it is unclear whether damage is caused by the infection or by the autoimmune issues associated with POTS.

3. A hard tick relapsing fever group spirochete in a Brazilian Rhipicephalus (Boophilus) microplus. (link to abstract)
One of Dr. Wright’s patients was planning a trip to Brazil, and he was reminded of this article from 2007, the first documented isolation of Borrelia from ticks in Brazil. The researchers found a species similar to the Relapsing Fever isolate Borrelia lonestari and labeled it Borrelia sp-BR. This species of Borrelia was found in the Rhipicephalus (Boophilus) microplus tick, a hard-bodied tick that feeds on cattle (it is also known as the southern cattle tick). This tick can be found in South and Central America, as well as in Africa, Asia, and Australia.

4. A novel relapsing fever Borrelia sp. infects the salivary glands of the molted hard tick, Amblyomma geoemydae. (link to abstract)
Japanese researchers have found a new, yet unnamed, species of Borrelia. It is phylogenetically related to B. miyamotoi and B. lonestari (both of which cause tick-borne relapsing fever). The new species was found in Amblyomma geoemydae ticks, which feed on cows and other large animals. Also found in 5% of the ticks studied was Borrelia sp. tAG, a species associated with reptiles.

5. Associations of passerine birds, rabbits, and ticks with Borrelia miyamotoi and Borrelia andersonii in Michigan, U.S.A. (link to full text)
A four-year study from Michigan, published in October 2012, examined ticks found on wild birds and rabbits to see what isolates of Borrelia they were carrying. Two strains of B. miyamotoi were found, and this was the first time B. miyamotoi was documented in ticks removed from wild birds. Most of the birds carrying ticks positive for B. miyamotoi were Northern Cardinals. Ticks found on birds and rabbits also tested positive for B. andersonii. The authors of the study conclude, “Given the current invasion of I. scapularis, a human biting species that serves as a bridge vector for Borrelia spirochetes, human exposure to B. miyamotoi and B. andersonii in this region may increase.”

Dr. Wright reminded patients that there are currently no commercially-available tests (in the U.S.) for B. miyamotoi and B. andersonii. He also recommended that people limit exposure to wild birds and bird feeders.

Dr. Wright discussed the following articles with the members of the Borrelia (Tick-borne Relapsing Fever and Lyme disease) patient support group in their August meeting:

Dr. Wright drew attention to two figures from this article. 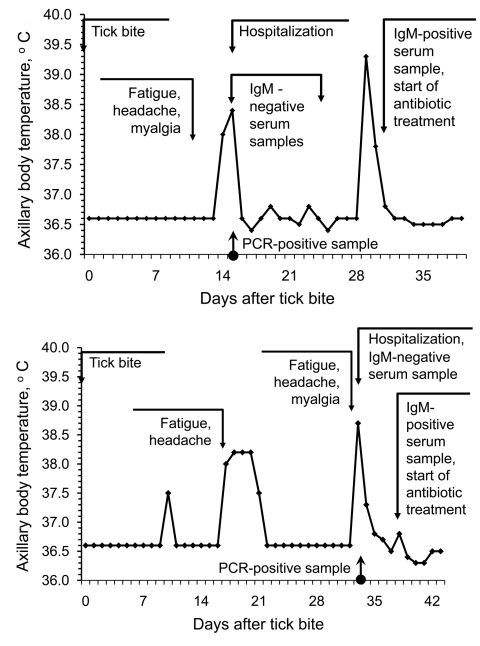 2. Signs and significance of a tick-bite: psychiatric disorders associated with Lyme disease (link to abstract)

This is a study from the Netherlands in which a researcher reviewed the literature on psychiatric disorders and Lyme disease. The disorders most often associated with Lyme disease were:

Dr. Wright mentioned a case of a child with “atypical psychosis” who turned out to have a Borrelia hermsii infection, and recommended that patients with psychiatric disorders of an unknown origin be screened for Borrelia infections.

5. Solitary erythema migrans in children: comparison of treatment with clarithromycin and amoxicillin. (link to abstract)

Dr. Wright discourages patients from letting their pets sleep with them in their beds, as this is how many zoonotic infections can be spread. He also stresses the importance of keeping one’s house free of rodents (which carry ticks). “We still haven’t learned the Middle Ages lesson about rodents living with humans,” Dr. Wright said in reference to the bubonic plague.